How Steve Jobs influenced my life 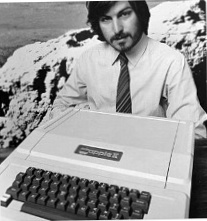 The world has lost one of this generations greatest influencers.  There’s not many who can lay claim to have profoundly shaped the world that we live in, but Steve Jobs can.  I did not know the man but my career has been shaped by the products he created and my children grow up in a world where iPhones, iPads, Macs and the AppleTV are all second nature.

My experience goes back to my early childhood, my Dad was Deputy Principal at Napier Boys’ High School where he set up the School’s first computer lab with AppleII computers.  He’d bring one of them home in the weekend and it was through this, at the age of about 10 that I started to be drawn to computing as a career.  Firstly playing games like…Pong, Brick out, Lemonade Stand…and then programming from about the age of 12 – started by copying out assembler code from computer mags for games like Frogger, Space Invaders (both of which I’ve just reinstalled on my iPad).

Steve Jobs had an undeniable passion for what he did.  Passion, to make a difference.  Such passion is well established as one of the key ingredients in the world’s most successful businesses.  It’s something we’ve come to actively look for in the people we back…have they got a little bit of Steve Jobs in them?

For the past 33 years, I have looked in the mirror every morning and asked myself: “If today were the last day of my life, would I want to do what I am about to do today?” And whenever the answer has been “No” for too many days in a row, I know I need to change something.

My early exposure to Apple, the influence of the undeniably approachable Apple technology and Steve’s entrepreneurial example have shaped what I do today.

Thanks Steve, go in peace.