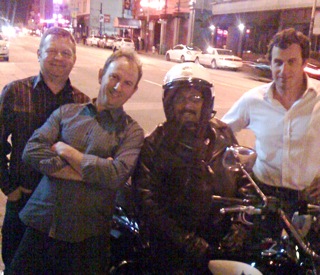 We’ve just got back from a great week in San Francisco attending the American Angel Capital Association Annual Summit and catching up with Kiwi’s doing great things in the Valley.  The week was stimulating and invigorating on a number of fronts but I will focus this post on my thoughts on the conference and key learning for New Zealand Investors and Entrepreneurs.

Firstly some background. Globally, Angel Investment is becoming increasingly organised and recognised for the significant contribution it makes towards innovation and economic development.  These conferences represent a gathering of investors drawn from a large number of organised groups across the US and the rest of the world.  They are a fantastic networking opportunity for active New Zealand investors and an opportunity to learn from investors across the world.  Approximately 420 people attended the conference with 70% estimated to be active investors.

Cross country investment.  There is an early movement from Angel Groups to start considering investment opportunities across borders.  I find this a bit of a conundrum, as most Angel Investors I know want to stay close to their investments so I’ve been concerned about how genuine this really is.  The perspective I’ve developed from an NZ inc. perspective is this – to truly grow and deliver the returns we want to see our businesses need to operate on a world scale; for us this generally will mean that we need to move our businesses or establish premises in offshore markets; the Angel networks are a great beach head for this activity.  Strategically we need to build these networks and find the right Angel Investors who can invest and get along side our companies in market. But here’s the kicker…relationships are a two way streak, if we want to make this work we’re going to need to start actively considering investing offshore as well.  The ball is already rolling, which is great, we have European and US investors both actively considering New Zealand opportunities, but I’m conscious that we’re going to need to reciprocate at some point.

Country initiatives to promote Angel Investments.  New Zealand does not do too badly in terms of the regulatory environment and government support for seed and venture investment.  Anecdotally New Zealand offers more support to the sector than that received in Australia and the US and less than that received in the United Kingdom and Europe.  In the UK and Europe tax incentives are offered to encourage investment in early stage companies – x% of your investment is allowed as a deduction from income and capital gains not taxed for qualifying investments.  Why is this important?  Early stage investment is critical to innovation and drives job and wealth creation.

Early exits.  If there was one theme at this conference I would say it was “finding and executing early exits”.  To that end I would encourage you to read Basil Peters book “Early Exits” found here.  Underpinning this thinking is research that indicates that most Exits for value in the US occur for under US$30 million.  The FaceBooks, Googles and Twitters of the world are anomalies and the statistical probability of getting one of these is under 1% i.e. you’d need to make 100 investments to get 1 Google.  But, contrast this with the high volume of M&A activity in the US market, for example I was told that Oracle made 70 acquisitions last year alone.  From an Angel Investors and Entrepreneurs perspective the hypothesis proposed was to find opportunities to build strategic value and then exit to a multi-national that can exploit it’s full potential – before you’re EBITDA positive (see Tom McKaskill).  Strategic value means not selling on EBITDA multiple but selling on the potential that the IP has in the hands of someone with established distribution and channels to market.  I heard the comment regularly in the conference that “it’s really expensive and time consuming to build EBITDA”.  My own experience supports this.  The take-away for NZ is simply this – make sure that there is an exit market for the opportunities we invest in, before we invest; work networks globally to position investments for an exit and don’t expect exits to happen unless you work it.

Venture Capital.  The health of the VC sector has improved from a D- to a D+  = still on life support.  Tech Coast Angels in the US have gone from having 20 VC affiliate members to 6.  VCs in the US are typically taking 10 years to exit and the nature of these funds is that they’re perceived as holding out for “big exits” and blocking “early exit” opportunities.  Consequently there is real debate amongst US Angels about whether they should target VC or not.  VCs will take a long time to exit and possibly forgo exit opportunities that do not deliver the magnitude of return; on the flip side they will drive the exit and “swing for the fences”.  All of that said, the discussions that we had outside of the meeting with Valley VCs indicated that there is still a significant amount of capital available for predominantly tech-based early stage companies, BUT competition is intense.  The question of whether to VC or not is a bit mute in New Zealand given the distinct lack of VC money we currently have in this country.

US IPO market practically dead. There were numerous comments made that the Post-ENRON Sarbanes-Oxley Act of 2002 has had a massive impact on the US IPO market.  The latest proposed financial reforms will compound these problems.  The impact of Sarbanes-Oxley has been to substantially increase compliance costs.  Only the biggest and best capitalised companies are progressing to IPO in the US at the moment.  In fact we had a presentation from the Toronto Stock Exchange promoting their market as an easier IPO path.

Let’s pause for a minute…what do these last three points mean, when taken together?  They mean that VALUATIONS are FALLING DRAMATICALLY in the US.  Valuations for both early stage investment and exit.  The  $10 to $50 million valuations for the partly built “next big thing” are dead!  First round Angel deals in the US are now being done for south of US$1 million pre-money.  Secondly, if you plan on exiting an investment…one day, perhaps…then you need to work offshore M&A opportunities and don’t rely on the Founder to do this for you.

Back to the conference:

Life Sciences.  This sector was well represented at the conference but the news was not encouraging.   Timeframes for Life Science based ventures are blowing out, driven by changes to FDA approval processes, particularly those required to go through the Pre-market  Approval (PMA) process .  Returns from these businesses are expected to now exceed 10-years and consequently venture dollars committed to the sector are expected to fall by over 50% over the next few years.  Increasingly US companies are looking to Europe as a launch market for new medical devices where the regulatory environment is considered less complex. Reimbursement was also highlighted for its complexity and the often incorrect assumptions made in business plans which have an order of magnitude impact on revenue potential. For New Zealand Ventures there’s nothing new here – study your regulatory and reimbursement pathways very closely; seek US expert assistance; don’t rely on VC being their when you need it; build relationships for your capital pathway early – in-fact hook-up as early as possible with Life Science Angels in the US (www.lifescienceangels.com).

Web 2.0.  Asia seen as the big, explosive growth market for Web 2.0 based opportunities.   The US market is topping out in terms of Internet penetration and use, while huge growth potential still exists in Asia – take what works well in the US and localise for China, India and other parts of Asia.  Real time data is also a key trend.  Real time data encompasses services like Twitter, YouTube, location-based apps and oddly purchasing history – Yes, people are now sharing their credit card data!  Time to get a life!  FaceBook is now seen in the US as an “operating system/ platform” with over 300,000 apps having been built and 350million users registered. Mobile internet now accounts for 20% of all internet use in the US and is growing exponentially.

That’ll do on the conference.  If you made it this far, then good for you.

PS.  The iPad is seriously cool – another game changer – but more on that later.